The diagram below shows the basic workflow for getting the job done. It will be the guide in this article and is divided into two major parts – Adobe and Apple. 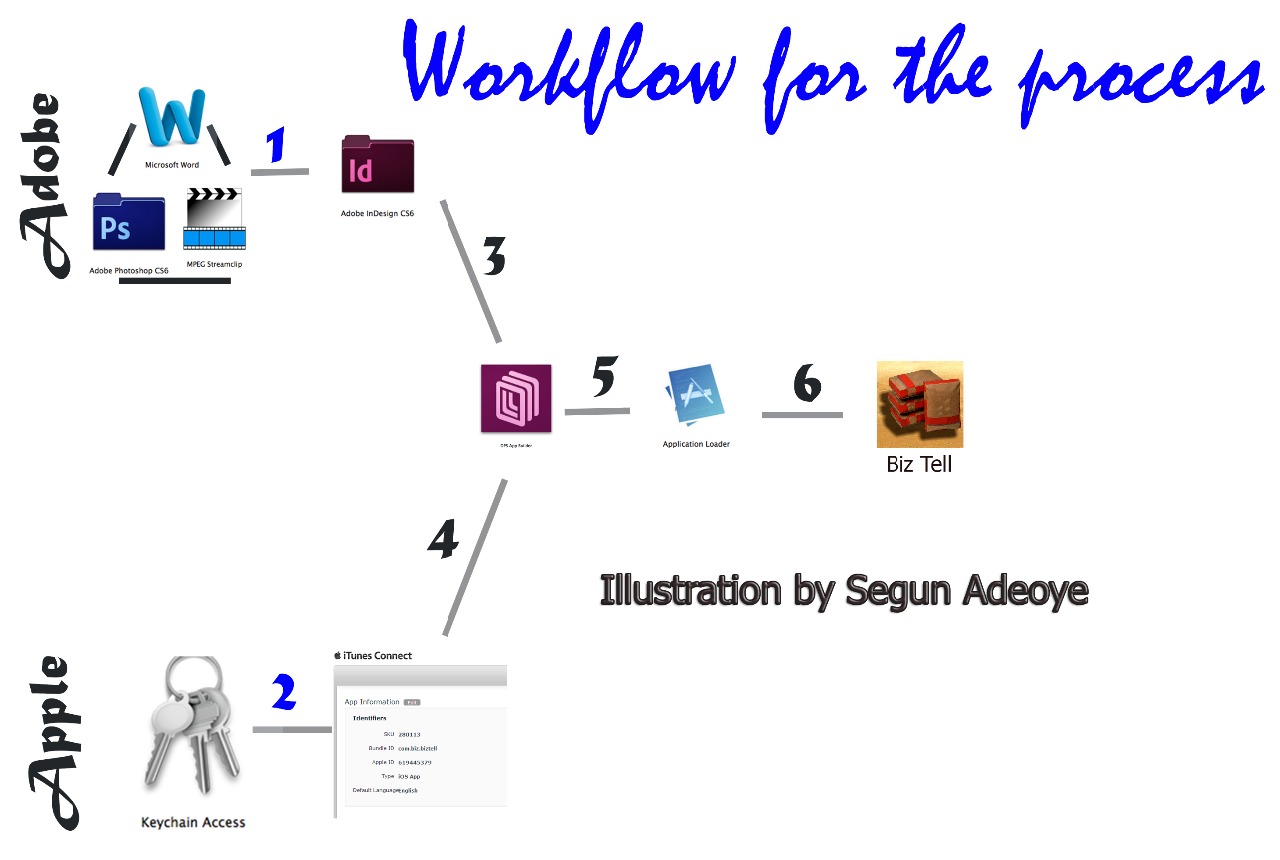 Basically, in this peice, I share how CC paid membership, (which enables you to be able to create an unlimited number of single edition iPad apps), is used with InDesign CS6, to create this single edition app - Biz Tell, accessible on both the Apple App Store and the iTunes Store for download. For the purpose of following, it will be a great idea to download the app using the embedded link. The app features one of the editions of Tell Magazine. One quick point, though, the process is Mac-based (i.e. requires a Mac computer).

CC paid membership provides access to Adobe applications - Creative Suite, Illustrator, Premier Pro, Photoshop, Muse, Acrobat and the likes, along with benefit of being able to create an unlimited number of single edition iPad apps for distribution on the Apple App Store and iTunes Store, as long as you have an Apple developer account to utilize.

So download the Biz Tell app and let’s get started.

Step 1: Get your contents ready for planning/laying out in InDesign CS6. Digital publications contain texts, images, videos, and, in a number of cases, interactive contents created using html codes. While Adobe InCopy is utilized in some workflows, Microsoft Word would be just enough to edit your texts for errors (note that text formatting would be done in CS6). Treat your images using Photoshop to have the right resolution and format - jpeg or png. MPEG Streamclip is a good tool to convert your videos to MP4 as this is the most preferred format. Wallaby can be used to create html codes for interactive contents. A good thing to do is to make a dummy of how the combination of texts, images, videos and interactive contents will look like in your publication. You then replicate the sketch to create folios in CS6. Using the Adobe Content Viewer, it will be a good idea at this point to prepare screenshots that would be utilized later in the app creation process. It’s a good idea to have the screenshots in png file format.

Step 2: This will involve “shuttling” between the Keychain Access application on your Mac computer, and the iTunes Connect section of your developer account. At the end of this step, you must have generated the necessary certificates (p12 certificates along with passwords for distribution and development files), and mobileprovision files for the development and distribution apps.

Step 3: With the necessary certificates ready, it’s time to launch the DPS App Builder in CS6. Before you launch the app builder, do ensure that you've got the latest version of the DPS App Builder installed on your Mac computer. In the Folio Builder menu, click on “Create App” (note that this feature is only available in Indesign version of Mac computer). In the username, enter Adobe ID associated with your CC paid membership.  Follow the prompts, and enter the app details, the appropriate splash screen images (should be in png file format), and the development and distribution mobileprovision files created in step 2. The DPS App Builder will generate two apps – development and distribution. Download the distribution app in preparation for the next step. The distribution app is the one to be submitted to Apple for review, which will either be approved for sale on the App Store, or rejected based on Apple’s standard and policy. The development app can also be downloaded and shared with friends via iTunes. The p12 certificates and passwords will be required for the download process.

Step 4: Now that the app is built and downloaded on your computer, the next step is to sign into your iTunes Connect account. This step will require the screenshots you created in step 1, the app name/title/description/icon, SKU Number (an alphanumeric identifier for your app), and keywords that will go along with your app. Follow the prompts to the point where your app is “Ready for Upload”.

Step 5: Ensure that you have the current version of the Application Loader app installed on your computer. The latest version can be downloaded from iTunes Connect. Launch Application Loader and follow prompts to upload the downloaded distribution app in step 3. At this point, the message on the app in your iTunes Connect account will change from “Ready for Upload” to “Upload Received” to “Waiting for Review”.

Step 6: This is the waiting period between the time your app was successfully uploaded for review, and the time it will become “Ready for Sale” on the App Store. When the app is approved, you’ll get a notification from Apple to the effect. Notification will also be given, if it was rejected. As soon as it is approved, it will require only a few hours for it to become live on the App Store, and available to be downloaded on the iPad. If your app was rejected, the reason(s) for its rejection will be included in the notification that would be sent to you.

As can be deduced from the illustration for the workflow of the process highlighted above, the Biz Tell app passed Apple’s rigorous review process. It was approved in seven days. The review process can take from seven days to four weeks.

Learning at the feet of Deborah Potter