Attending the 36th annual convention of the National Association of Black Journalists, in Philadelphia, Penn., this August, gave me a priceless platform for networking, learning, and meeting great journalists, whom I had come across their by-lines and seen on T.V. screens, but never thought I will have the opportunity of having contact with. The venue was the Pennsylvania Convention Centre, where hundreds of journalists, including members of NABJ like me, converged for the week-long convention. 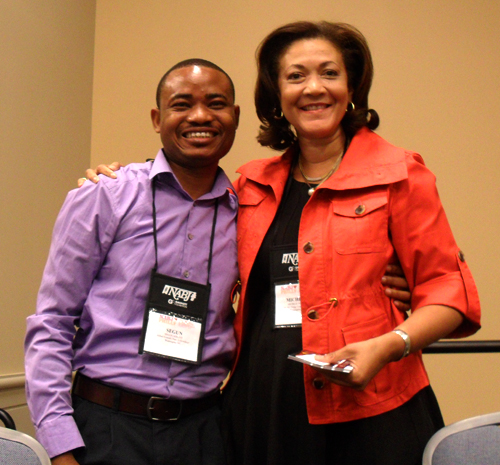 Series of activities lined up, included, interactive sessions geared towards empowering journalists with new ideas for the 21st century challenge (especially the economic downturn), hands-on trainings to equip journalists with new skills for the digital age, career fair and exhibitions, lectures, and workout sessions with emphasis on a healthy lifestyle for journalists.

The theme of the convention, “The Power of Change: Claiming Your Destiny”, according to Kathy Y. Times, the immediate past NABJ president, “goes to the heart of the challenges we’re facing in our evolving industry, namely the troubling corporate cutbacks, layoffs and furloughs.” It was interesting to note that the seeming crisis rocking the media industry, resulting in layoffs, and shrinking newsrooms, was one that knew no boundaries, as similar cutbacks have also taken place on a large scale, even in newsrooms in Nigeria.

There were no boring moments during the convention. From the welcome ceremony held at the National Constitution Centre on Independence Mall, providing access to the historic museum that brings the U.S. Constitution to life with multimedia exhibitions, to the opening reception, which featured Arianna Huffington, of the AOL Huffington Post Media Group, and special address by Eric H. Holder, Jr., U.S. attorney general, it just seemed the right place to be as a journalist.

Having had previous trainings on multimedia and computer-assisted reporting, I decided to explore other vista available to a journalist, even though these topics were also part of the varied interactive sessions at the convention.

The session on “Creating Wealth in an Innovation Economy”, done in partnership with the Pennsylvania-New Jersey-Delaware Minority Supplier Development Council, provided tips on how to become a successful entrepreneur in the media and communication industry. I was drawn to this session because of the strong belief that journalists can be passionate about what they do, which includes telling stories of people, and yet, still create wealth. The session emphasized the need to brand oneself, and to invest in the brand.

Lena West, president and chief social media strategist of Influence Expansion, shed light on leveraging social media to expand one’s influence, visibility, and ultimately income. “It’s not necessary to use all social media platforms,” she said. “Think about people who need your content, and then get the right tool to reach them.” Basically, the idea is to be able to identify where the market is – the audience. There is the important aspect of engaging the readers, listening to them, and getting information from them, with regards to what interests them.

At the interactive session, tagged, “Authors showcase: When media becomes memoir”, I had the rare opportunity of learning at the feet of great journalists, who were not only journalists, but also authors. Present to share their experiences, ideas, and indeed, surmounted obstacles to get their books out to the public were, Eugene Robinson, Pulitzer Prize-winning newspaper columnist and former assistant managing editor for The Washington Post, and author of “Disintegration: the Splintering of Black America”; Ellis Cose, author of “The End of Anger”, and former contributing editor Newsweek and former chairman of the editorial board and editorial page editor of the New York Daily News; Michele Norris, host of the National Public Radio evening news program “All Things Considered”, and author of “The Grace of Silence”; Gwen Ifill, senior correspondent, PBS, and author of “The Breakthrough: Politics and Race in the Age of Obama”; Soledad O’Brien, host of the "In America" documentary unit on CNN, and author, “The Next Big Story: My Journey through the Land”; and Don Lemon, CNN Anchor, and author, “Transparent”.

One common thread that tied up the views of these journalists-cum-authors, was the fact that a rejection from a publisher should not be the end of your goal of being an author. “It’s tougher and tougher to get published, but new options like self-publishing and the web, are proving a good alternative,” Robinson said. “But, still, a good idea, a powerful and unique voice, would help stand out with a good dose of persistence.” Very important tips to being a good and marketable author, are: attempt to answer questions around you, endeavour to raise issues that will stir conversation people want to talk about, look for opportunities, know your market and readers, and remember that people who buy books are the same people who are around you.

The session with Amy Webb, CEO, Webbmedia Group, which dealt on “top tech trends for journalists”, was really mind-boggling. From modern tools for digital note-taking, a special kind of pen that works as a recorder and pen that captures what you’re writing, to Google+, image recognition tools, and webinar tools for live blogging, Webb, simply stunned everyone, with her mastery of latest developments in the tech world, waiting to be explored by journalists. She explained how tools and applications like Google+, zangzing, heytell, fastsociety, kik, face.com, spokeo, knowein, beluga and groupme, can be used for journalism purposes and investigative reporting. “It’s an evolution process,” she said, explaining why as journalists we cannot afford not to keep abreast with trends in the hi-tech world. “If you don't stay atop of the evolution, it would be hard to catch up, and you need to get more tools in your toolkit.” Basically, it was all brand new information.

Talking about new things, I was drawn to the session that had to do with a new design for innovative journalism that involved video games. It was interesting to note that video games are also being explored as a potential tool for storytelling, even in journalism. The whole idea, explained LaToya Peterson, founder, Racialicious, was to help the viewer live through the story, and to “think about experiencing it through you.”

Resources for making games could be found on https://app.sliderocket.com, one of which is the gamelab software. To make such a game for the purpose of journalism, LaToya said, one would need to outline things like what the goal is, who the principal characters would be, and various elements that would be involved. “It might still be new and yet in its rudimentary stage, but in as little as long as seven years, it would become a major part of the digital media,” she said. “It's going to give journalism a competitive advantage in the nearest future.”