I did not forget those words in a mail Antonio Fins, my mentor and editorial page editor of the Sun-Sentinel, sent me earlier in the year while preparing for the fellowship.

And, as if to match these words with action, even while driving me from the airport that cool Tuesday evening, April 5, he did not waste time in giving me what you could call a “brief” on the activities of the Sun-Sentinel, and some of the things I would be involved in.

The about two-and-a-half hour trip from Washington D.C., which had some bumpy moments, was tiring, but the excitement with which Fins received me, gave me an inner strength that got me taking in all he was saying.

Since I had indicated environment reporting as part of my goals, he talked about the Everglades, reeling out statistics and information, just to give me an insight about the environmental issues surrounding it. He literally whet my appetite. 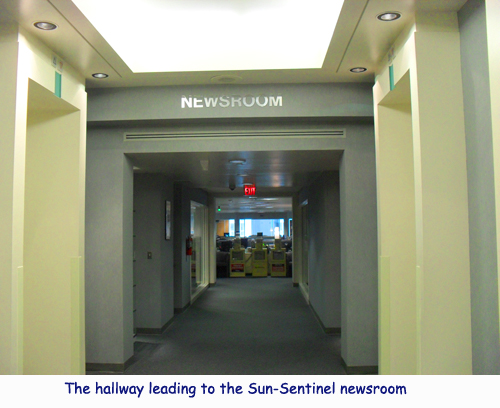 Though the day was already far spent, Fins deemed it fit to get me into the swing of things.

Our first port of call, after dropping Arlene Satchell, business reporter, who accompanied me from Washington D.C., was the Sun-Sentinel newsroom. But, of course, after this, he gave me a “welcome” dinner.

As I would later find out, the Sun-Sentinel office was about a 10-minute drive from my apartment.

Located on the ninth floor, the newsroom occupies a large space, with all the gadgets you would expect to see in an American newsroom.

It was very much unlike the newsroom I was used to back in Nigeria. Here, like every other reporter, I had an intercom phone on my desk that I could use to communicate with anyone in the newsroom. There is a store for pencils, papers and pens that all reporters like me had access to. This was very rare back home, perhaps, because of the cost implication. Reporters also post their stories in newsgate – a system which every reporter has access to, as long as your system is configured to log on to it.

The reporters here are very warm. It was a sharp contrast to what I had expected, especially after the course on “culture shock”. I’ve gone along with a number of them, though for many we have never even spoken. But, really, it is not because they are not friendly. The journalism profession is a time-consuming profession. 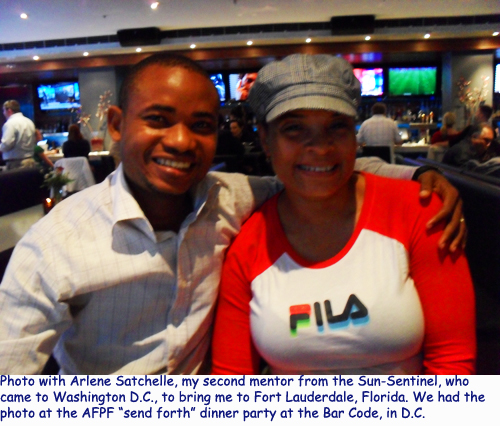 Every morning, there is a meeting of all the desk editors/heads at 9:30, which I also attend. The interesting thing about this meeting is that it usually lasts for about 30 minutes. For me, it was a lesson about the importance of time management. Every editor brought story ideas to the table. They are discussed thoroughly, yet, it never exceeds that period of time. Back home, editorial meetings could last for three hours.

To further immerse me into “life” at the Sun-Sentinel, Fins, brought me into the “buzz” editorial team. For the uninitiated, the Sun-Sentinel website has a “Today’s Buzz” section, which receives significant visits from readers.

At the meeting, which holds just after the meeting of the desk editors, we discuss topical issues brought up from the tons of news events happening within and outside of the U.S. I’ve had the privilege of anchoring one of the “Today’s Buzz”. It was a very exciting task for me. We also come up with topical issues that would used for the Sun-Sentinel editorial. 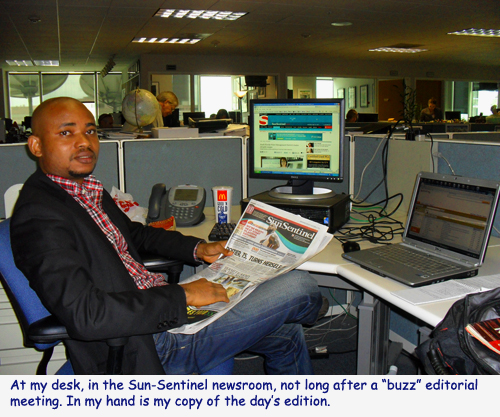 For my interest in multimedia, my mentor has already introduced me to Danny Sanchez, who is in charge of the section. I would be with him full-time at some point in time.

Perhaps, due to my desire to improve on my writing skills, I’ve sort of found myself involved at the editorial level.

With the skyrocketing price of gasoline, I found myself being thrust with the task of writing a feature on the issue. I was glad that my piece turned out to be a “clean” piece, with my mentor having to make very minimal corrections. It was a most necessary boost for the tasks ahead.

A big thank you to Jonathan Friendly and Randall Smith for the "drills" during the journalism course in Washington D.C.

But like they say: a journalist is as popular as his or her last by-line. So, got to keep on working.

In the Steps of the Pope

A Sip of Magdalena Abakanowicz's Artworks