A new report by TRAFFIC, the wildlife trade monitoring networ, just made available, indicates that poaching and illegal trade of bears, driven largely by the demand for bile, used in traditional medicine and folk remedies have continued unabated across Asia on a large scale.

The research surveyed 13 Asian countries/territories and observed bear bile products in traditional medical outlets in 12. The countries with 50 percent bear bile products included China, Hong Kong, Malaysia, Myanmar and Vietnam. The most frequently encountered products were whole bear gall bladders and pills—found in half of the outlets surveyed.

The report, Pills, Powders, Vials & Flakes: The bear bile trade in Asia, revealed that the most frequently encountered products were whole bear gall bladders and pills. They were found in half of the outlets surveyed. 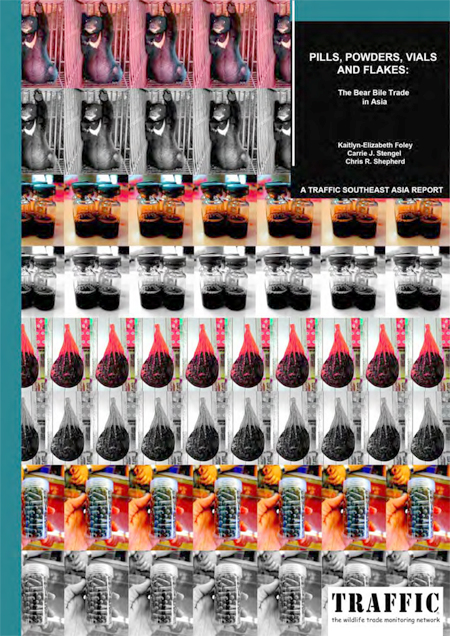 TRAFFIC’s research suggested a complex and robust trade in bear products. Several of the countries/territories surveyed were either producers or consumers of bear bile products, while in some cases they acted as both. Mainland China was the most commonly reported place of origin for these products across the region.

“Unbridled illegal trade in bear parts and products continues to undermine CITES which should be the world’s most powerful tool to regulate cross-border wildlife trade,” said Kaitlyn-Elizabeth Foley, lead author of the report and Senior Programme Officer of TRAFFIC Southeast Asia.

Robinson added that: “This report, in addition to Animals Asia’s years of research, shows that the bear bile industry is engaging in illegal practices. As pressure mounts on the wild bear population, there are serious questions to be answered on the welfare and pathology of farmed bears, and the risks to human health in those who consume the contaminated bile from such sick and diseased bears.”