A new analysis on the population of Sharks, has shown that barely a decade after members of the United Nations Food and Agriculture Organization (UN FAO) approved an international plan to conserve Sharks, the plan is yet to be fully implemented.

The implication of this, is that the population of sharks has continued to dwindle, even as top catchers delay on conservation actions. Sadly, with about 30 per cent of all shark species now threatened or near threatened with extinction, there is little evidence that the plan has contriubuted significantly to improved conservation and management of sharks.

The report, The Future of Sharks: A Review of Action and Inaction, analysed fisheries information provided by UN FAO. The findings showed that since 2001, only 13 of the top 20 top-catchers have developed national plans of action to protect shards. It also indicated that it was unclear, how the 13 have implemented the plans and how effective it has been.

The top 20 shark catchers account for more than 640,000 tonnes annually, nearly 80 per cent of total shark catch reported globally. The top 10, in order, are: Indonesia, India, Spain, Taiwan, Argentina, Mexico, Pakistan, United States, Japan, and Malaysia. Indonesia, India, Spain and Taiwan account for more than 35 per cent of all sharks taken annually, based on their own reported data.

The analysis, produced by TRAFFIC, the wildlife trade monitoring network, and the Pew Environment Group, was released ahead of a crucial meeting of the UN FAO’s Committee on Fisheries (COFI), taking place from January 31 to February 4 in Rome, Italy. The two organizations recommend that COFI perform “a comprehensive review into the actions being undertaken to manage fisheries in which sharks are taken.” 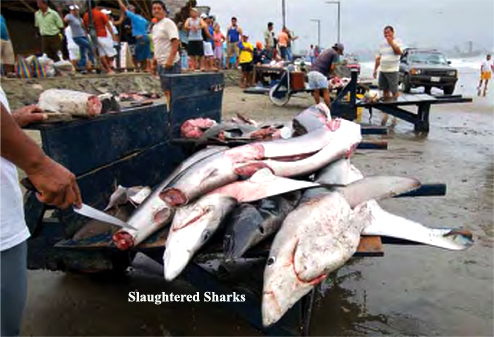 “The fate of the world’s sharks is in the hands of the Top 20 shark catchers, most of whom have failed to demonstrate what, if anything, they are doing to save these imperiled species. They need to take action to stop the decline in shark populations and help ensure that the list of species threatened by overfishing does not continue to grow,” said Glenn Sant, TRAFFIC’s Global Marine Programme Leader.

“Sharks play a critical role in the ocean environment. Where shark populations are healthy, marine life thrives; but where they have been overfished, ecosystems fall out of balance. Shark-catching countries and entities must stand by their commitments and act now to conserve and protect these animals,” said Jill Hepp, Global Shark Conservation manager for the Pew Environment Group.