There has been a confirmed sighting of one of the rarest and most enigmatic animals in the world, the Saola (Pseudoryx nghetinhensis) from the Annamite Mountains of Laos and Vietnam.

It would be the first time in more than 10 years, that it would be sighted. The Government of the Lao People's Democratic Republic (also known as Laos) has announced that in late August, villagers in the central province of Bolikhamxay captured a Saola and brought it back to their village. 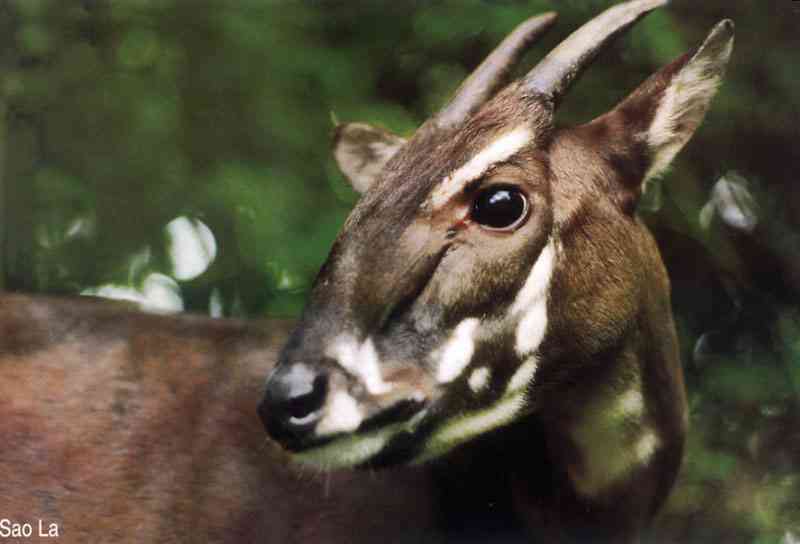 When news of the Saola's capture reached Lao authorities, the Bolikhamxay Provincial Agriculture and Forestry Office immediately sent a technical team, advised by the International Union for Conservation of Nature (IUCN), Saola Working Group and the Lao Programme of the Wildlife Conservation Society (WCS), to examine the Saola and release it.


Unfortunately, the animal, an adult male, weakened by the ordeal of several days in captivity, died shortly after the team reached the remote village. The animal was photographed while still alive.


"The government of Lao PDR and WCS are to be commended for their rapid response and efforts to save this animal. We hope the information gained from the incident can be used to ensure that this is not the last Saola anyone has a chance to see," says William Robichaud, Coordinator of the IUCN Saola Working Group.


This is the first confirmed record of the species since two photographs of wild Saola were taken in Laos by automatic camera traps in 1999.


The Saola was first discovered in 1992, Vu Quang Nature Reserve, in Vietnam,  near the country's border with Laos. With their long horns and white facial markings, the Saola resembles the antelopes of North Africa, but is more closely related to the wild cattle.


Saola are secretive and so seldom seen (no biologist has ever reported seeing one in the wild) that they have been likened to unicorns, in spite of the fact that they have two horns. It’s been speculated that a Chinese myth of a magical unicorn, the qilin, may have been derived from familiarity with Saola in prehistoric China, although the species does not occur there today, if it ever did.

The Saola is listed as "Critically Endangered" on the IUCN Red List of Threatened Speciesand probably no more than a few hundred exist . With none in zoos and almost nothing known about how to maintain them in captivity, extinction of Saola in the wild would mean its extinction everywhere.


"The death of this Saola is unfortunate,” says the Provincial Conservation Unit of Bolikhamxay Province. “But at least it confirms an area where it still occurs and the government will immediately move to strengthen conservation efforts there."


The animal was reportedly found in the village's sacred forest in remote Xaychamphon District, but it is not clear why the villagers took it into captivity. After its death, the technical team took the carcass to Pakxan, the provincial capital, where biologists from WCS and the Lao government preserved all parts for analysis, future study and reference. This is the first Saola specimen to be so completely preserved.


"Study of the carcass can yield some good from this unfortunate incident. Our lack of knowledge of Saola biology is a major constraint to efforts to conserve it,” Dr. Pierre Comizzoli, a veterinarian with the Smithsonian Conservation Biology Institute and a member of the IUCN Saola Working Group, says. “This can be a major step forward in understanding this remarkable and mysterious species. It's clear that further awareness-raising efforts about the special status of Saola are needed but the Saola doesn't have much time left. At best a few hundred survive, but it may be only a few dozen.The situation is critical.”


The Lao Department of Forestry (DoF) and provincial and district authorities are urging villagers in the area not to capture Saola, and immediately release any they might encounter.


"As a Party to the Convention on Biological Diversity, and as outlined in our National Biodiversity Conservation Strategy, Laos is committed to conserving biodiversity, and we want to give special attention to 'flagship species', such as the Saola," Bouaphanh Phanthavong, Director of DoF's Division of Forest Resources Conservation and a member of the IUCN Saola Working Group says.


"This incident highlights the importance of Laos to global wildlife conservation. Saola and several other rare endemic species are found almost nowhere else in the world,” Latsamay Sylavong, the national representative for the IUCN Lao Programme, says. “Our knowledge of them is limited, and in Laos we need to improve protection of both the ecosystems and the special species they hold, like the Saola. Much needs to be done".


The IUCN Saola Working Group is part of the IUCN Species Survival Commission (SSC).  It is a network of scientists and conservationists under the auspices of the IUCN SSC Asian Wildlife Cattle Specialist Group, and provides strategy and technical guidance for Saola conservation.

The IUCN is the world’s oldest and largest global environmental organization, with more than 1,000 government and NGO members and almost 11,000 volunteer experts in some 160 countries. IUCN’s work is supported by over 1,000 staff in 60 offices and hundreds of partners in public, NGO and private sectors around the world.


The IUCN helps the world find pragmatic solutions to our most pressing environment and development challenges, while also working on biodiversity, climate change, energy, human livelihoods and greening the world economy by supporting scientific research, managing field projects all over the world, and bringing governments, NGOs, the UN and companies together to develop policy, laws and best practice.