"It is wildlife traders such as this one that have given Malaysia a reputation as being a poaching hotspot and trade hub. These criminals are posing a serious threat to the continual survival of many increasingly threatened species," said Chris Shepherd, Southeast Asia's regional deputy director of TRAFFIC, the wildlife trade monitoring network.

Shepherd was referring to a restaurant owner who officers of the Department of Wildlife and National Parks in Pahang, Malaysia, found close to 17 kilogrammes of common barking deer meat, two skinned mouse deer, 54 argus pheasant feathers, and a white-breasted waterhen. The officers raided the man's house and shop, and found him to also be in possession of meat and parts of several protected species including several pieces of dried tiger parts. The dried tiger parts were concealed in a glass jar. 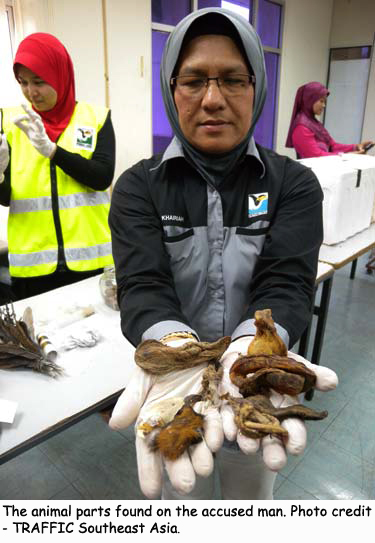 The man, whose name has been withheld, is said to be a second-time offender. He had in 2008, been convicted for being in possession of barking deer meat without a permit. Currently, he could face two charges under Section 68 of the Wildlife Conservation Act 2010 for being in possession of the animal parts without permit. He could also face a fine of $196,000 while also serving a term in jail.

An enthusiastic Shepherd said: "The authorities are to be applauded for taking action, especially in such a critical Tiger landscape.  TRAFFIC urges the authorities to penalize this man and others like him to the full extent of the law to deter further such crime, and to demonstrate just how serious they are about protecting Malaysia's natural heritage."