The headline in a tabloid in Africa, or indeed, Nigeria, would have read: “Police seal up Resort over Gay and Lesbian activities”. That was the thought that raced through my mind as I went to the press conference held at the Royal Palms Resort and Spa. The resort prides itself as the largest full-service, gay luxury resort, not only in Florida, but the United States.

It was in the company of Doreen Hemlock, staff writer who has covered the business and tourism beat for more than a decade at the Sun-Sentinel. In my mind, I pictured a scenario where a journalist might turn out to get a different kind of story. In this case, instead of the opening of the largest gay resort, it might just be the mass arrest of gays and lesbians.

Really, that would be the “big” news if it had been in Nigeria, my home country.

But, no! This is America. And, though some folks still have ill-feelings towards gays and lesbians (as is evident in House Speaker John Boehner’s hiring of a law firm to defend the Defense Of Marriage Act earlier in the year), it’s no doubt a different world in the United States.

It was the first time I would be in the company of known gays. But as a journalist I learned first-hand the need to be open-minded. I also met Steve Rothaus, journalist at the Miami Herald, who reported gay issues. 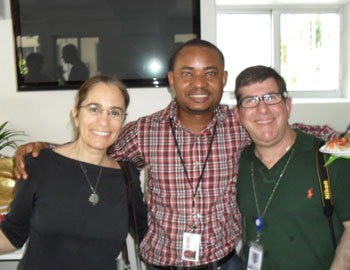 Perhaps, it was a necessary experience for a journalist like me, who comes from a country where gays are very much derided. I got to know about new terms, like gaydar, a word coined from gay and radar, a kind of internal radar that can tell if someone is a gay. There is also gaybourhood, coined from gay and neighbourhood, to mean a neighbourhood for gays and lesbians.

It was obvious from the press conference that as far as the media, and indeed, tourism agencies in the United States are concerned, the question was no longer “why are you gay?” but "what do you have to offer?"

The U.S. gay travel market, according to the Community Marketing of San Francisco, was worth about $65billion in 2010. In Fort Lauderdale, alone there are about 150 gay-owned businesses, including top-notch nightlife and beachside gay guesthouses. The Resort also hosted the 28th annual global convention of the International Gay and Lesbian Travel Association.

Though Florida has not legalized same-sex marriage as is now the case in New York, Richard Gray, ambassador of the new Royal Palms Resort & Spa, described it as an opportunity “to showcase how much we have changed in the last 10 years with vibrant ‘gayborhoods’ including Fort Lauderdale and Wilton Monors, and our new sleek and sexier look.”

Inside one of Florida's Conservation areas

Profile of Milk, a movie on gays