Learning to drive in the US with Easton Davies

I sat in the driver’s seat, surprised that this was the car I was going to use for my two-hour driving lesson.

It was a Toyota Corolla - 1998 model – with automatic gear transmission.

In Nigeria, driving schools don’t use such a car.

The Volkswagen Beetle - the People’s Car – that’s the toast of driving schools. They come with manual gear transmission, and of course a stiff steering wheel.

It was also interesting how easy it was to get a driving school on the internet. Such was a rarity back home. Driving schools don’t think in the line of having a website.

There were hundreds of them online that operated in and near Fort Lauderdale. 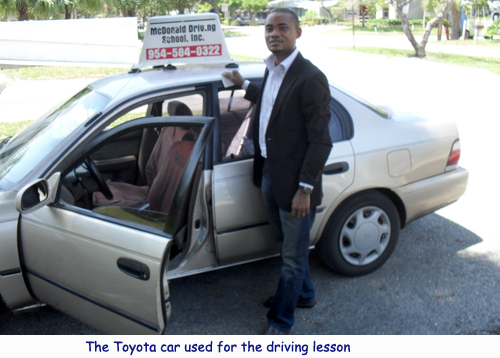 It was not much of a surprise, however, that driving schools seemed to be such a huge business. Pubic transportation in the city is not at all prominent – it is near zero. You rarely hear of anyone talk about catching a bus. Virtually everyone owns a car. And if you don’t, there are the car rentals from where you could get one to rent. The cabs, too, are everywhere.

Easton Davies, my driving tutor scheduled the lesson for noon, and promised to pick me up at my apartment. His assurance on the phone showed that this was a man who knew the city like the palm of his hand.

Although he didn’t wear dreadlocks like Bob Marley, his accent, easily gave him away as a Jamaican – a rastafarai.

I didn’t immediately know what form the lesson was going to take, after I had gingerly stepped into the car.

Beside me was Easton.

“Start the engine man,” he said, in a rather commanding tone that sounded more like a rasp, after assisting me to adjust my seat.

The key was already in the ignition.

There was no wasting time, the lesson had begun.

“Tarn da signal left, man”, he would say when we were near to a point where I would need to navigate to the left. He would follow it with: “tarn it off man,” as soon as we were done. Same went for the right turns, too.

He pointed at the signposts displaying the speed limits, and would urge me to “step yah feet off the gas man,” following it with, “yu don wan no bald man give yu ticket.”

The bald man obviously, was the police, who regularly lurk in corners to catch offenders. An offender would have to part with $250, he made me to understand.

“Yu break dah traffic rule bald man give yu ticket yu try to bribe him, yu go to jail,” he said, explaining that attempting to bribe your way out in such a manner only added insult to injury, “this is America, it’s not Nigeria or Jamaica,” he stressed, giving a hilarious laughter.

While putting me through the various traffic signs, the delicately marked yellow and white lanes on the road, which a first-time driver might not easily notice, he grew more comfortable with my driving, and we got engaged in general discussions.

“There’s no freedom here, no freedom in America, it’s not a free society, it’s not,” he said. “In Jamaica there is freedom, I can do whatever I want to do, I can kill a cow on the street, but you can’t do that in America.”

I gave a yes nod. It was all I could do.

“If a man come knocking on your door with something he says is free, don’t tek it man, don’t tek it,” he said. “He’ll come back following day asking yu for money. Nothing is free here man, nothing.”

To keep the conversation going, I chipped in the sad incident that led to the death of Diallo, the Guinean immigrant who was killed in New York by plain-clothed officers in 1999.

We talked briefly about Wyclef Jean, who sang about Diallo, and of course, Marley and his songs.

Then my eyes caught something that looked like a pedal, in front of Easton.

It was the first time I was ever going to see a car with two brake pedals. 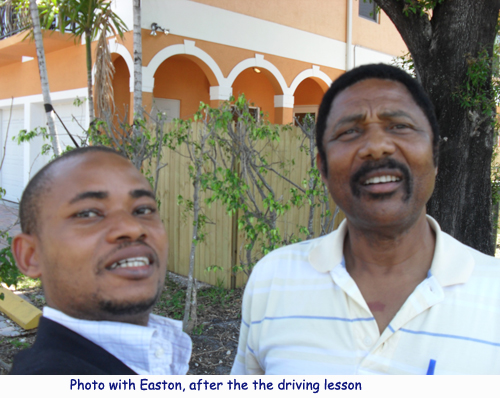 The two-hour driving lesson, which cost $90 ended at my apartment.

I decided to take a photo with him. He obliged.

It was all I could do to preserve those wonderful moments with Easton.