The Cable News Network (CNN) and Multichoice have launched the 2011 CNN/Multichoice African Journalist of the Year awards. The award, seeks to recognize and encourage excellent journalism practice on the continent.

The prestigious awards, which is now in its 16th edition, has grown in size, status and recognition, to become Africa's most prestigious media event. Its objective is to reinforce the importance of the role of journalists in Africa’s development and to reward, recognise and encourage journalistic talent across all media disciplines.

It's an media event, which Tony Maddox, Executive Vice President and Managing Director of CNN International, describes as an humbling experience. "The CNN Multichoice African Journalist Awards have been encouraging excellence in journalism across the continent...2011 promises to be another year of stellar African journalis," Maddox said.

Describing the awards as Africa's largest and most coveted journalism awards, Collins Khumalo, President, Multichoice Africa, said the company was delighted to be involved in an award that strives to showcase the best of the best of the works of journalists on the continent. "Each year we are proud of the talent showcased at the awards and excited about the great progress made by African journalists telling the African story," Khumalo said. 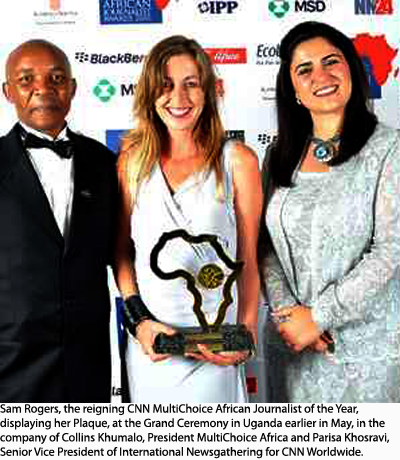 Sam Rogers, from e.tv South Africa, is the reigning CNN/Multichoice African Journalist of the year. Rogers emerged tops out of 2,074 entries from 44 countries across the continent, with her entry, "The Curse of the Nobody People".

Rogers said: “Winning the CNN MultiChoice African Journalist of the Year was possibly the highlight of my career. What an honour to be chosen a winner among so many brilliant African journalists, to be listed alongside the very best who have won this prestigious accolade over the years.  What a wonderful platform the CNN MultiChoice award is. It has allowed us to broadcast to a wider audience, to highlight the plight of persecuted Tanzanian albinos and has begun changing perceptions in that region. Their voices were finally heard."

For the 16th edition, the CNN/Multichoice African Journalist of the year, and other category winners would be announced in Johannesburg, South Africa, in June 2011. Each finalist will receive a cash prize, with each category winner also receiving a laptop computer and printer. The CNN MultiChoice African Journalist 2011 Award winner will be selected from the category winners and will receive an additional cash prize and will have the opportunity to participate in the CNN Journalism Fellowship at CNN Headquarters in Atlanta.

Entries would be accessed based on quality of writing, originality and objectivity, extent of research undertaken, and relevance of entry to the Africa continent. Such entries should have been published or broadcast between January and December 2010, and should be in English, French  or Portuguese.

There is also the category that seeks to recognize and commend a journalist or group of journalists, whose work enhances the cause of media freedom in their country, and demonstrates courage, integrity and initiative. Such journalist(s) can however, only be nominated through the Free Press Africa Award nomination form.