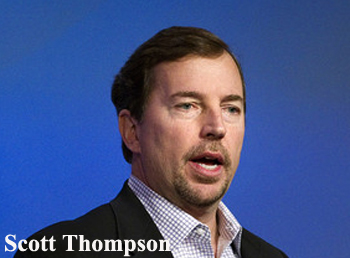 The move comes as Yahoo Inc. re-positions itself to attract technology executives and computer programmers, in a bid to restore its glory as the once revered Web powerhouse.

Roy Bostock, chairman, Yahoo Inc., indicated the intention of the company to remain as a publicly traded company. According to Bobstock, the move was part of a "strategic review" of the company's restructuring efforts.

“Scott brings to Yahoo a proven record of building on a solid foundation of existing assets and resources to reignite innovation and drive growth, precisely the formula we need at Yahoo,” said Roy Bostock in a statement.

Thompson who is billed to assume duty on Jan 9, said that the "core business assets are stronger here at Yahoo than people believe." According to him, there's world-class technology and data about Internet users that Yahoo can harness to provide better services to its customers and advertisers alike.

Tim Moore, chief financial officer for Yahoo, has been interim CEO since the ouster of Carol Bartz in September last year, because of failure to increase revenue during her two-and-a-half year tenure.