Samuel Aranda, a Spanish photographer has won the 2011 World Press Photo of the Year award. His photo of a veiled woman holding a wounded relative in her arms, inside a mosque used as a field hospital during the uprising in Sanaa, Yemen, was selected out of the more than 100,000 entries, as the overall winning photo. 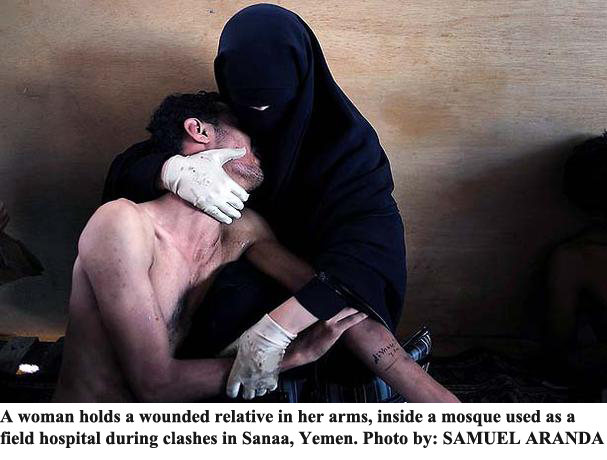 The photo, which was taken on Oct. 15 for The New York Times, was described by the jurors as one that “encapsulated many facets of the uprisings across the Middle East”, which turned out to be a major news event of the year in review.

The wounded relative was among the many injured during the protests against the rule of Ali Abdullah Saleh, the Yemeni president.

"The winning photo shows a poignant, compassionate moment, the human consequence of an enormous event, an event that is still going on," said Aidan Sullivan, chairman of the judging panel. "We might never know who this woman is, cradling an injured relative, but together they become a living image of the courage of ordinary people that helped create an important chapter in the history of the Middle East."

"It stands for Yemen, Egypt, Tunisia, Libya, Syria, for all that happened in the Arab Spring," said Koyo Kouoh, member of the panel. "But it shows a private, intimate side of what went on, and it shows the role that women played, not only as caregivers but as active people in the movement."

The woman is almost completely concealed under black robes as she clasps her relative, a thin man whose torso is bare, grimacing in pain.

Sullivan said Aranda thought the man might have been the woman’s husband, but he was not sure. He said the image has religious "almost Biblical" overtones and noted its resemblance in composition to Michelangelo’s Pieta _ but in a Muslim setting.

"It stands for Yemen, Egypt, Tunisia, Libya, Syria, for all that happened in the Arab Spring," said juror Koyo Kouoh. "But it shows a private, intimate side of what went on, and it shows the role that women played, not only as caregivers but as active people in the movement."

In all, 57 photographers from 24 countries won awards in a field of more than 5,000 professional photographers, who submitted more than 100,000 entries.

Aranda’s photo also took first place in the "People in the News Singles" category. He will get euro10,000 ($13,300) at an awards ceremony later this year.

PHOTOS: World Press Photos of the year for 2011