A press release made available by the wildlife trade monitoring network, TRAFFIC, has revealed that the Royal Thai Police has seized more than a dozen unregistered and illegally registered elephants from camps in three provinces in the south of Thailand as part of sweeping investigations into live elephant smuggling and the abuse of elephant identity certification and registration systems. 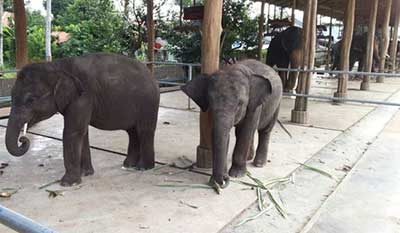 The animals were removed from camps in key tourist locations popular among Thai and international visitors. The operation began on Tuesday with the removal of two elephants from a camp in Ko Chang, in Trad province. Today, authorities seized five elephants in Phang Nga, seven in Phuket and two in Krabi.

The co-ordinated effort across the provinces was jointly managed by the Royal Thai Police, Natural Resources and Environmental Crime Division, the Department of National Parks, Wildlife and Plant Conservation and the Department of Livestock.

The relocation and care of animals is being decided on a case by case basis. More unregistered elephants are expected to be removed from camps in four other provinces in the coming months.

The seizures follow the discovery of a number of elephant identification certificates issued for animals that were not residing in their specified locations. Police believe that elephants were taken from the wild, either in Myanmar or elsewhere, smuggled into Thailand where they were trained, transferred to the camps, and then registered at a later date using these falsely provided certificates.

Both Thailand and Myanmar are party to CITES which prohibits any cross border trade in elephants.

Police have linked one of these suspects to all the camps it raided yesterday and today. The camps are believed to have purchased the identification certificates for these elephants from this suspect. Further, Police have also confirmed that at least one registered owner of the animals, in the Koh Chang case, will also face prosecution under the Wild Animal Reservation and Protection Act and the Forestry Act.

The capture of wild elephants has been banned in Thailand since the 1970s, with Thailand’s Draught Animal Act B.E. 2482 under the Department of Provincial Administration and Ministry of Interior requiring that domesticated elephants be registered with the government from the age of eight years.

Once registered, these elephants are deemed to be commercial animals under the Act and the owner then has the right to trade and use the animal at will.  Registration certificates are usually only issued for animals born from female domesticated elephants, however the system does not require owners’ proof that the animals were born in captivity.

The system thus opens the door to the laundering of elephant calves, with criminals catching these calves from the wild, smuggling them into the country and registering them as domesticated elephants.

“The illegal live elephant trade poses a significant threat to wild Asian Elephants, and TRAFFIC welcomes this significant move by the Thai authorities. It demonstrates their commitment to elephant conservation in the region,” said Naomi Doak, TRAFFIC’s Co-ordinator in the Greater Mekong region.

In 2009 TRAFFIC highlighted that at least 240 live elephants had been illegally exported from Myanmar to Thailand via the Three Pagoda Pass and other land border crossings. The study also found that over a quarter of all live elephant exports from Thailand between 1980 and 2005 could have been illegal due to incomplete and inaccurate declarations made on the documentation required under CITES.