Pope Francis has declared Popes John Paul II and John XXIII saints, in front of a crowd of hundreds of thousands. 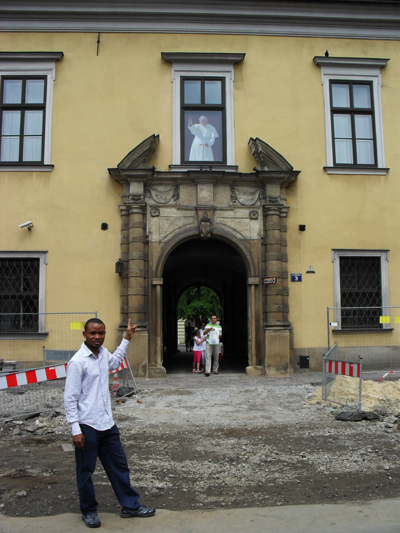 He praised his two predecessors as "men of courage" at the Vatican service, the first time in history that two popes have been canonised at the same time.

The Mass was attended by Pope Emeritus Benedict, who quit as pope last year, and roughly 100 foreign delegations.

Analysts say Francis is trying to balance the conservative legacy of John Paul with the reforming zeal of John.

At the climax of the service, Pope Francis said in Latin: "We declare and define Blessed John XXIII and John Paul II to be saints and we enrol them among the saints, decreeing that they are to be venerated as such by the whole Church."

Relics of each man - a container of blood from John Paul and a piece of skin from John - were placed near the altar.

Pope Francis paid tribute to the two new saints as "priests, bishops and popes of the 20th Century".

"They lived through the tragic events of that century, but they were not overwhelmed by them. For them, God was more powerful," he said.

The Vatican estimated some 800,000 pilgrims had poured into Rome to see the two-hour ceremony first-hand.

For those unable to make it into St Peter's Square, giant screens were set up in nearby streets and elsewhere in the city.

"Four popes in one ceremony is a fantastic thing to see and to be at, because it is history being written in our sight," said Polish pilgrim Dawid Halfar.

The Vatican confirmed on Saturday that 87-year-old Benedict XVI - now officially titled Pope Emeritus - would make a rare public appearance alongside his successor.

But John Paul II, whose 26-year reign ended in 2005, has been fast-tracked to sainthood in just nine years.

Many among the huge crowds that gathered as he lay dying cried out "santo subito", which means "sainthood now".

By contrast Italian-born John XXIII, known as the Good Pope after his 1958-63 papacy, had his promotion to full sainthood decided suddenly and very recently by Pope Francis.

The BBC's David Willey in Rome says there was a political dimension to this.

By canonising both John XXIII - the pope who set off the reform movement - and John Paul II - the pope who applied the brakes - Francis has skilfully deflected any possible criticism that he could be taking sides.