Pierre Thomas is NABJ's Journalist of the Year

The National Association of Black Journalists (NABJ) has named Pierre Thomas, Senior Justice Correspondent for ABC News, as the 2012 Journalist of the Year. 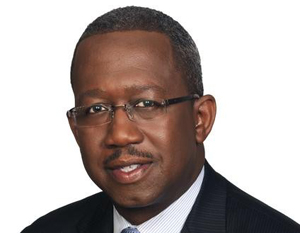 "Pierre Thomas' entire career has been a testament to his abilities as an incisive reporter whose storytelling is noteworthy," said NABJ President Gregory Lee Jr. "We honor him now because during the past year his abilities have allowed him to be frontline, reporting on the stories that captivated us all."
Thomas and his team lead ABC's coverage of many of last year's tops stories. Last January, when Congressman Gabrielle Giffords and several others were shot in Tucson, Ariz., Thomas was among the first people giving details about what happened. He reported the facts and helped keep ABC News from reporting that the congresswoman was dead, which some outlets did in error.

Thomas was the very first person in the news division to tell his colleagues that the reason the President of the United States was holding a hastily arranged press conference on a Sunday night was that mass murdering terrorist Osama Bin Laden had been captured and killed. Throughout the week, Thomas broke news, including two exclusives with fascinating specifics on what they found in Bin Laden's compound.

"Pierre is one of the finest journalists in the country.  He is not only respected and well-liked by his peers and colleagues, but also by the people he covers.  He has a clear vision about his job as a journalist, and every day he comes to work prepared to be the best in the business," said Robin Sproul, ABC News' Washington Bureau Chief. "We are thrilled to see Pierre and his work recognized by the NABJ."
Thomas joined the network in November 2000 and reports for "World News with Diane Sawyer," "Good Morning America," "Nightline" and other ABC News programs.

Earlier he served as CNN Justice Department correspondent and held several reporting positions with the Washington Post.
Thomas started his career at The Roanoke Times and World-News. He graduated from Virginia Polytechnic Institute and State University in 1984.
Thomas will be formally honored at NABJ's 37th Annual Convention and Career Fair in New Orleans, June 20-24. The honor will be bestowed at the Salute to Excellence Awards Gala which recognizes journalism that best covered the black experience or addressed issues affecting the worldwide black community during 2011.
- Your Pal
Back