Olu Falae identifies 5 of the people who kidnapped him

Chief Olu Falae, who was kidnapped by Fulani herdsmen and released after paying N5m ransom four days after, has identified his abductors who were paraded before him by the police on Tuesday. He identified 4 of the kidnappers who were mean to him and 1 who was kind to him. 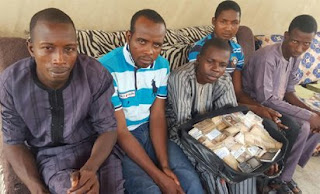 Five of Falae’s kidnappers were arraigned, yesterday, before an Akure High Court, Ondo State and Chief Falae will be the star witness when the trial starts on November 10.

The suspects, who were docked for kidnapping, conspiracy and armed robbery 24 days after abduction were Abubakar Auta, Bello Jannu, Umaru Ibrahim, Masahudu Muhammed and Idris Lawal all pleaded not guilty when the charges were read to them.

Three of the kidnappers admitted that their share from the N5m ransom collected was N100,000 each. The accused persons could not speak English and were ordered to be remanded in prison custody by the high court judge, Justice Rotimi Olamide till November 10 when the case would be heard.