Nigeria's Wellington Jighere, 32, has emerged the first African to win the World Scrabble Championship after beating 129 competitors to clinch the title.

He achieved the feat on Sunday, November 8, 2015 after beating Lewis MacKay, his English opponent, with four straight wins in an epic best-of-seven finale. 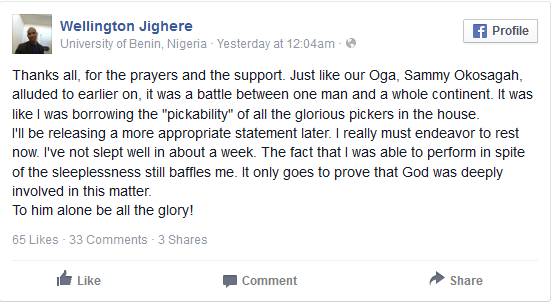 The historic achievement of Jighere, has further heightened the jubilant mood in the country, as it also coincides with the victory of the Golden Eaglets who defeated Mali at the FIFA U-17 World Championship in Chile as they retain the title to make it the fight time. Nigeria won in 1985, 1993, 2007, 2013, and now in 2015.

A jubilant Femi Adesina, Special Adviser on Media and Publicity to the Nigerian president, Muhammadu Buhari, also took to Twitter to express the joy and cheerful mood of the Presidency and the Nigerian citizenry.