My bag of coins…

I keep a small bag of coins. It contains a number of pennies, dime, quarter cents, and five cents. It’s relatively strange to me to be in possession of coins.

Back in Nigeria coins are a rarity. They are only kept as memorabilia, and it’s odd to transact business using coins. You never see anyone with the one naira, 50kobo or 10kobo coins, in public, either at the store or for alms. Yet, it’s not that they do not exist. I can’t give a reason, but it seems we feel “too big” to carry coins. Instead, we prefer to be in possession of 50, 10 and 5 naira notes (or bills as it is called in the U.S.). A product with a price tag of N3.50 is simply rounded up to N5.

I started keeping the bag of coins in my car, after the experience I had when I went for an assignment at the Fort Lauderdale beach. I had no coins on me, but needed to park in one of the parking lots. The parking meter had space for coins but no bills. To use my debit card, I had to use its phone service. Of course, along with being charged for parking there, I was also charged for the phone service. It kind of hurt me. So, I told myself it wouldn’t repeat itself. 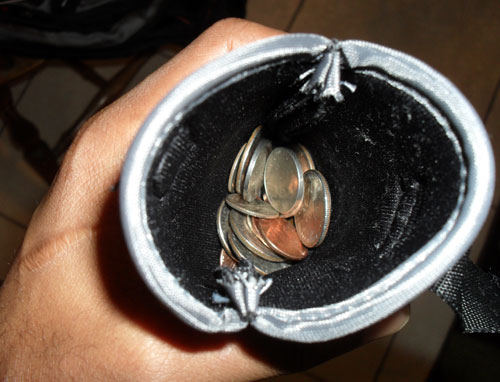 But each time I remember the experience I had when I went for the Donald W. Reynolds National Center for Business Journalism workshop on Investigative Private Companies and Nonprofits, in Orlando, Fla., I thank my stars for that small bag of coins.

The trip from Fort Lauderdale to Orlando took about 4hours. Along the route are a couple of inescapable toll-booths. Arriving at the Renaissance Resort, venue of the workshop I had driven into the park not taking note that complimentary parking expired after 30minutes.  I had arrived two hours before time.

After walking to the venue of the workshop I discovered that preparations were still ongoing. So I decided to go refuel before my departure later in the day, and to also get something to eat, as I had not eaten that morning before leaving Fort Lauderdale, and the car had run out of gas. In short, I paid $15 for only about 45minutes. To save some cash, I decided to leave my car at the Subway restaurant where I had gone to eat, and so trekked back to the workshop venue. It was a great time of learning new things about business reporting.

Really, the parking lot already drained my pocket. I felt I had no problems, however, since I had my debit card on me. That was what I thought, until I got to the last toll-booth along the Florida-Turnpike road on my way back to Fort Lauderdale that night.

The elderly man, with his bald head simply pointed to the screen in front of me and with a giggle, said, “Ten dollars and seventy cents.”

“What!” Shock was written all over my face. The highest I paid at the toll booths before then was $2.50. Calmly, I reached for my pocket, only to discover to my chagrin that I had only $6 bills left on me. I was short of $4.70. This was the end.

Would he take the car from me? What am I going to do now? Would he call the police? Oh my God!

The man gave a smile, and followed it with a request for my driver’s license.

At that point I became agitated, and didn’t hide it. Then he explained calmly that he wasn’t going to take my license from me, but that he was going to take down the details and send me a bill. I viewed it more like being issued a ticket, a fine, and it got me more agitated.

I stretched out my hand through the window to give him my license. Then I remembered my bag of coins. I reached for it, in that split second, gathered all the dime, five cents, and quarter cents. Interestingly, all the coins added up to $4.70, with still a few left.

Immediately, I told the man, “I’ve got the money”. He was surprised, and couldn’t help but beam as he counted the "bunch" of coins in addition to the $6 bills. In short, I had my license back, escaped being billed, and continued my journey back home. Thankfully, there were no more toll-booths to confront.