Julian Assange to be Extradited to Sweden

For Julian Paul Assange, 39, founder of Wikileaks, the website that has been a subject of debates and diplomatic row over the release of secret documents involving the United States (US), it not only rains, it pours.

The embattled whistleblower, had expected along with his lawyers, that he would get a favourable verdict in the case he faces, over sexual assault allegations. His optimism was high that he would not be extradited to Sweden over the case against him. 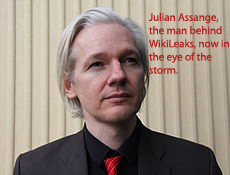 As things have however turned out, he would be on his way to Sweden to face the charges.

The Belmarsh Magistrates' Court in London, where the case was being heard, has ruled that he be extradited to Sweden.

Assange and his lawyers believe that he would not get fair hearing in Sweden. They also have seven days to appeal the ruling.

Travails of a Whistle-blower: Julian Paul Assange in Police Net

Hamza Al-Mustapha, Accused of Involvement in Several Attempted Murders is Discharged and Acquitted

Profile: The Man Behind WikiLeaks