Dame Patience Jonathan weeps out of concern or displeasure?

05/05/2014 16:19
First lady Patience Jonathan wept at her second enlarged stakeholders' meeting on the over 200 abducted schoolgirls, kidnapped by members of the Boko Haram sect from the Chibok Federal Government College, Borno State.
Beyond purportedly weeping out of grief for the abducted girls, Mrs. Jonathan, was actually expressing displeasure at the absence of Hajiya Nana Shettima, wife of the Borno State Governor, at a second enlarged stakeholders’ meeting on the abducted schoolgirls. 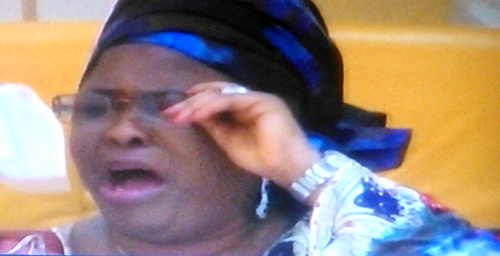 The First Lady burst into tears after she took a roll call and discovered that the governor’s wife and those she invited were absent.
Shettima was absent at the first meeting, which Jonathan convened on Friday in Abuja to seek clarification on the number of girls involved.
Jonathan postponed the meeting to Sunday to enable Shettima, parents of the abducted girls, the school’s security guard and two of the girls that escaped, among others, attend the meeting.
She kept on repeating: ”There is God in everything we are doing. There is God o’’.
The first lady had requested Shettima to chair the committee constituted on Friday to seek clarification to the conflicting issues on the exact number of missing girls.
Jonathan, however, expressed shock that the Borno State Government appeared not to be taking the issue serious.
She said before the kidnapping and the killing started in Borno State, she assured Shettima of her support, but was surprised that after such incidence, Shettima did not come to see her.
“After the incidence, I waited for her, she did not come. I sent for her, she came.
“I asked questions, no answer. I asked her to come with the principal and parents: she did not turn up till today. To our greatest surprise, she sent a commissioner.
“The next thing I saw was women demonstrating. No woman will fold her hands while her house is on fire. She is the mother of Borno.
“She is the mother of these children, I am their grandmother. She should be more concerned and come to her grandma.
“The police, army, WAEC, government officials came with a few of their own but no parent was present to tell us their child was kidnapped or among those who escaped.
“The mother of Borno is not concerned about what is happening, her children are involved,” Jonathan said.
She urged Nigerian women not to take to the streets till they get to the root of the matter.
She said, “I don’t want anybody to reply or abuse me on the pages of newspaper. It is because we are pained and crying, that is why I am doing so.
“Why should I cry more than the bereaved? The world will ask me a question if I do. If after today, Borno people say we should not help them, don’t go to the street to demonstrate.
“You are playing games. Don’t use schoolchildren and women for demonstration again. Keep it to Borno, let it end there. Until you people are ready to cooperate.”
Back