Chief Justice of Nigeria Suspended Over Allegations of Misconduct

The National Judicial Council (NJC) has later made available a statement stating that Justice Aloysius Katsina-Alu, the Chief Justice of Nigeria (CJN) and Justice Ayo Salami, the President of the Court of Appeal (PCA), were not suspended from being members of the NJC, as earlier and widely reported. The statement however, confirmed that a probe panel had indeed, been set up to investigate allegations of misconduct leveled against the two justices.

Aloysius Katsina-Alu, Chief Justice of Nigeria (CJN) has been suspended from being chairman and member of the National Judicial Council (NJC). The decision was taken at a gathering in Abuja, the federal capital territory, where a five-man panel was set up to look into the accusation of misconduct levelled against him by Ayo Salami, President of the Court of Appeal (PCA), who was also suspended. The CJN had earlier stepped aside as chairman of the NJC.

While the NJC denies the suspension of the two justices, there exemption from the NJC, was to ensure thorough investigations into the allegations levelled against Katsina-Alu by Salami. The tango between the two justices, which had almost amounted to a case of an eye for an eye and a tooth for a tooth, came to the fore, after a plan to promote Salami from President of the Court of Appeal, to the Supreme Court. It was a move, which Salami, rather than consider a "promotion" as it was being purported, saw it as demotion, as it would bring his status low in the ranking of the legal practitioners in the country. 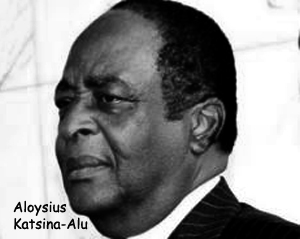 Salami smelt a rat in the so-called promotion, and not only declined to accept it, but chose to unearth allegations of misconduct against the CJN, which he believed necessitated the "plan" to tacitly remove him as PCA.

According to Salami, his refusal to succumb to the pressure of the CJN, demanding him to compromise standard in a Sokoto State gubernatorial dispute, was the reason why the CJN deliberately wanted to remove him as PCA. In an affidavit, in which he deposed to a suit against the CJN, he claimed that:

“Following my appointment as President of the Court of Appeal, I found among the pending election petition appeals, the Sokoto State Gubernatorial election petition appeal. I set up panels of the Appeal Court to dispose of the pending petitions including that of Sokoto... I was, however, shocked when subsequent to the setting up of a panel on the Sokoto Gubernatorial election petition appeal, and after all parties had filed and exchanged briefs, adopted same and judgment reserved, the 1st defendant [CJN] summoned me by telephone to his office in Abuja...[he] asked me to disband the panel I had set up for the appeal on the excuse that if the panel allowed the appeal and removed the governor, the ripple effect would lead to the removal of our highly revered Sultan of Sokoto."

The tango between the two highly placed justices, has in recent times formed basis of discrediting the judiciary, with many, like Bamidele Aturu, a legal practitioner and human rights activist, describing the judiciary as corrupt. "Our system condones corruption and it would be extremely myopic for anyone to expect the judiciary to be extricated from the comprehensive mess in the society," he said. Aturu, had in fact, in the past, condemned the appointment and swearing-in of Katsina-Alu as the CJN in 2009, by the then CJN, Idris Kutigi. The swearing-in of Katsina-Alu, was a subject of great contention, so much so that eight of the 15 justices of the Supreme Court were absent from the occasion.