The Alfred Friendly Press Fellowships (AFPF), an American non-profit organisation, which seeks to promote free press across the world, by bringing approximately 10 journalists to the United States (US), for approximately six months, in-depth, practical introduction to the professional and ethical standards of the US print media, has announced the successful journalists for its 2011 Fellowships programme. 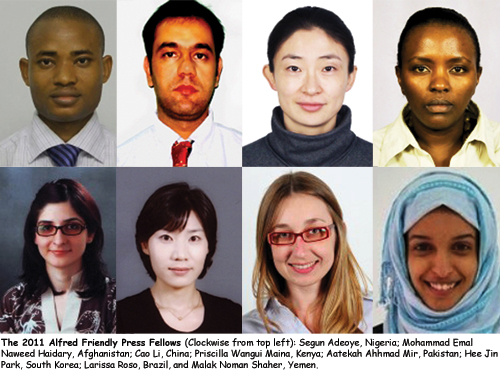 After a rigorous and elaborate selection process, which ended late last year, the AFPF Advisory Committee, selected the eight journalists, out of 54 journalists who sent in applications from 30 countries worldwide (with the exception of the US). The 2011 Fellows would have the opportunity of being exposed to an environment that would enable them to gain practical understanding of the function and significance of the free press in the US. They would also gain experience in reporting, writing, and editing that will further enhance their journalism career.

Profile of Members of the Alfred and Jean Friendly Foundation Board